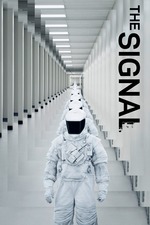 The first 20 or so minutes of this are gorgeously done. Just a simple, naturalistic story of 3 young friends trying to sort out their own dynamic on a cross country trip. It's beautiful intimate film making.

Then, for whatever reason, we are suddenly flung into what basically amounts to 2-3 different twilight zone episodes at once. And while the charisma and development of that opening set-up is enough to keep us engaged...it just isn't enough to overcome the sudden shift in tone. The young actors, all of whom are solid, give it their damndest, but The Signal wants to be 3-4 different things, and it fails at being all of them. By the end it feels downright childish. Like so many sci-fi/speculative films, the characters are so much more interesting than the vapid premise that overshadows them.

Props to Laurence Fishburn, it's not easy doing your entire performance in a hazmat suite.

The Taking of Deborah Logan