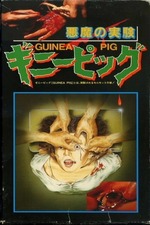 While I've tried to watch Guinea Pig: Devil's Experiment years ago, I was never able to finish it. Now that I've managed to finish up the whole thing, I can safely say that I have no motive to watch any of the rest of the Guinea Pig films. This is the sort of film you'd hear about for its reputation as being one of the most disgusting films you'll ever see, and while it very much is exactly that, the one question that came to my mind as I was watching it was simply in regards to whether this really had so much of a point to it other than to shock audiences, but when nothing is addressed within the attempts at shock value, what really is the point to even watching something as overly repulsive as this?

Even when you come to consider the film's short running time of a little above 40 minutes, watching Guinea Pig: Devil's Experiment feels extremely tedious. The shock value isn't particularly the main reason as to why something like this feels like such a chore to sit through, but the main reason as to why it's such a chore is because it is begrudgingly dull. This is something I find rather common for films that seem to have an aim only for shock and nothing else (i.e. Human Centipede) but considering the fact that Guinea Pig: Devil's Experiment isn't exactly made to feel like so much of a feature film is where I find that a much bigger offense is being committed.

The film is made to replicate a snuff film, and at least the film had some courtesy to call itself out for what it is within its opening scroll. The means that the film intends with replicating a snuff film only give off more of a look that almost looks like not only an amateur product, but a pornographic film at that. And much like watching pornography, there is no real value at all to be found within Guinea Pig: Devil's Experiment. If there were some sort of value some would insist that this film is condemning of people who are eroticized by this sort of material, it falls dreadfully flat because it looks much like the sort of stuff that they know would leave their perverted desires as satisfied as can be.

It became clear from the treatment of the female whom we are watching the whole time in here that I was only picking up something much more disgusting from the imagery, but given the fact that it was the intent of the people behind it, this is also an area where it falls dreadfully flat. Although I've no doubt that specific segments of torture are indeed rather difficult to watch, it already became apparent that so many of these methods of torture were beyond ridiculous and thus, the shock value also falls down woefully. Even at moments where you'll want to shield your eyes, it still offers no form of real value because there's nothing else it's doing that's worthy of warranting every second you'll spend watching it.

Guinea Pig: Devil's Experiment is the sort of film that comes to mind when I'm asked what sort of films define "vile cinema" in my eyes. This is a dreadfully pointless experience that only left me disgusted as it did leave me rather angry. Although I expected content that would be enough to make someone like myself disgusted, it came from the sheer fact that so many of these methods of torture came off as preposterous especially under the impression it looks like a snuff film where I simply found all the shock to fall dreadfully flat. It soon became much clearer there as much like the female in the film who is being subjected to all this torture, I, as a viewer, felt tortured by this film. Unless your curiosity is really that morbid enough, I can't even recommend this trash to the average gore fiend. Don't feed whatever you may mistake for curiosity. You think you want to see Guinea Pig, but really, you don't want to.