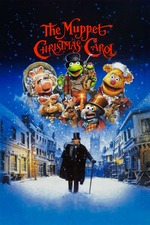 I get odd looks in some circles whenever I mention that The Muppet Christmas Carol is my favourite screen adaptation of Charles Dickens's classic story. Yes, we also have the greatness in Alastair Sim's portrait of Ebenezer Scrooge but Michael Caine's performance always remained rooted in my heart. Maybe it might be a statement I'm making from pure bias but my heart has always stayed in favour of The Muppet Christmas Carol for I have grown up with the Muppets since I was a child and my love for the franchise has retained through all the years. With the many cinematic takes on A Christmas Carol out there, nothing comes out the same way The Muppet Christmas Carol does for with all the smiles that the Muppets have brought me over the years, this one will always be the best in my eyes.

Everyone knows the story of A Christmas Carol very well, the greedy Ebenezer Scrooge is paid a visit from his late partner to warn him of what is set to come for his life if he refuses to change his ways. In this version, we now have Muppet performers now coming in to play significant roles ranging from Bob Cratchit (Kermit the Frog) and Jacob Marley (now Jacob and Robert as played by Statler and Waldorf) together with narrations from Gonzo the Great (as Charles Dickens) and Rizzo the Rat. But aside from having Muppet performers now within many significant roles in Charles Dickens's classic story or having Dickens himself now as a Muppet, why is it that The Muppet Christmas Carol stands atop all other retellings of the story?

It would have to start at how it mixes both the delight of the Muppets together with the traditional storytelling which made A Christmas Carol the notable story that it is. As always we have a dash of the Muppets's sense of self-aware humour but at the same time it's astonishing just to look at how this blends so perfectly well with Charles Dickens's own words in order to create one of the most faithful adaptations of the story to be put to the screen. Notable lines being lifted out of the original text blend together so beautifully even when they are delivered by the Muppet performers, it becomes clear already why this take stands atop all the rest when we are set to talk A Christmas Carol on film.

For all the Muppet performers that come along and how they perfectly embody which characters they play, what's also most wonderful in here is actually the performance that Michael Caine leaves behind when he plays Ebenezer Scrooge, a role which I would argue is the finest portrayal of the character to have ever graced the screen. I'm aware what Alastair Sim had left behind in his portrayal of Scrooge that gave the big old humbug such a frightening look for how we all imagine him to be but with Michael Caine's charm he carries so much sympathy inside of his image it is hard enough trying to resist what he leaves behind. Over the years I've seen the good and bad of Ebenezer Scrooge portrayals going all around from George C. Scott to Jim Carrey but nothing has ever managed to top Caine's portrait in my eyes.

This probably isn't a perfect film but to me it will always remain the definitive take on Charles Dickens's story for it never fails even at warming me up in all the right spots. The Muppet Christmas Carol is everything I love about the Muppets and it is also one of the very best things I'd ever imagine to come out of the holidays in general. A film like this always sets me up for the perfect spirit because it contains that spirit that I think of when I think of what we all love about the holidays. Funny, charming, tender, and uplifting, I can only imagine that it would take a humbug to outright dislike the wonder of The Muppet Christmas Carol or the Muppets in general.