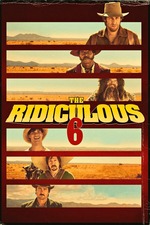 Adam Sandler has done it again. For once it's almost like he acknowledges the mentality of his fans and placed it into one character, that one being Taylor Lautner's aggravating portrait of an idiot. At the very least The Ridiculous 6 is not another Jack and Jill but it is an extremely hateful and insulting parody of a magnificent western and a samurai epic. But those are the very least of the offenses that Adam Sandler has committed with this humourless and tasteless offering.

Being a parody of John Sturges's The Magnificent Seven (which in turn is a remake of Akira Kurosawa's Seven Samurai) it's amazing how much Adam Sandler and his crew are insulting the very sources of inspiration behind it all. At the very least you can watch a parody like Young Frankenstein and see it is evident Mel Brooks loves the original Frankenstein but nowadays it seems like it has become an absolutely lazy type of comedy. The overbearing use of fart jokes and bad slapstick is already a sign that there's nothing but sheer laziness within how the comedy is written and it already grew tiresome after ten minutes.

That isn't the worst aspect to everything, though. Where everything comes to sink even lower would be within the blatant racism that's present. Films like Get Hard already have gone to show that they only care about offending their viewers as opposed to coming up with something to remember. But whereas Get Hard only went after African Americans, The Ridiculous 6 does even worse by offending not just African Americans, but Native Americans, Mexicans, and Asians.

Oh, and that's not all. Not only is it racist, but the misogyny that seems to be rampant throughout a good chunk of terrible 2015 releases that I've seen all year is indeed present once again. When you have a Native American woman's name being "Never-Wears-Bra" I think that's already a sign that we're off to a bad start. And it happens not even half an hour in, so it becomes evident that it'll continue as it keeps going.

At two hours long, it is amazing how much it manages to drag such a length to feel much longer than it really is. Throughout the whole running time I was only waiting for it to end. Remember that feeling when you watch Magnolia or Seven Samurai - two films that run a little over three hours long - they don't even feel like they're at that length? The Ridiculous 6 at its unbearable two-hour length instead feels longer than the average David Lean epic. It is so easy to doze off then and there within the running time because the stunningly unfunny comedy only comes to make the experience all the more excruciating.

I don't even know how much more words I want to waste talking about such a vile and disgusting excuse of a comedy this was, but my point has been made. The Ridiculous 6 is one of the most miserable experiences that I have had the misfortune of coming across all month - probably even all year. Whether it be from the stunningly lazy comedy down to Adam Sandler's offensively poor Native American accent, it is already apparent that something like this shall be found funny by those with a similar mentality to Taylor Lautner's character in here. I'm sorry if that comes off as condescending, but that's just how much something like this angered me.