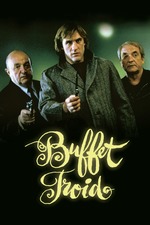 Why didn't anyone tell me sooner that Bertrand Blier more or less made a prequel to Ruiz's The Golden Boat by way of Buñuel (that is, if Buñuel was actually good), or I guess Luc Moullet?! It loses a bit of steam as it goes along (then again, arguably so does the aforementioned Ruiz film), and yet it's still probably my favorite film that I've seen so far this year, and there's been some stiff competition.

Especially during the opening stretch, I was vividly reminded for the first time in a while of what it's like to watch something perfectly tailored to one's own sensibilities just manifesting itself before one's very eyes. It's probably not altogether insignificant that I'm like seventy pages into a script I've been having some doubts about, and then suddenly I watch a film like this and I'm just like "yes, this is it! This is the tone!" and feel re-invigorated about what I'm working on. I guess I have to go watch more Blier stuff now?

(The only other Blier I've seen is, rather bizarrely, Un, deux, trois, soleil, which I watched many years ago and have barely any recollection of, except that I was thoroughly baffled/nonplussed by it).