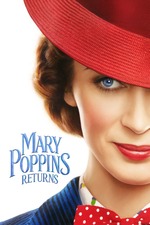 I was actually really excited for this movie, I thought Emily Blunt looked phenomenal as Mary Poppins and the movie looked like a great time. Sadly only half of that statement held true. Mary Poppins Returns is absolutely carried by Emily Blunt’s fantastic performance as Mary Poppins. After that, no more magic can be found.

Emily Blunt makes this bore of a film somewhat watchable. Her in the role of Mary Poppins is a match made in heaven. She is everything the character was all about providing all of the charm and delight you’d expect. Her relationship with the Banks kids is filled with spectacular chemistry but when the kids are without Mary Poppins, they’re not good.

All together, there is maybe two great musical sequences surrounded by a lot of bad ones. I always thought the best musicals don’t drown the audience in continuous song and dance. The best ones put more emphasis on story and characters and that’s what Mary Poppins Returns doesn’t do. You can’t go five minutes in this 130 minute film without a musical scene. You’d think with a really long runtime especially for a kids movie would have some more emphasis on the characters for kids to get behind but there is literally no development for any of the characters while returning to song and dance again and again. It doesn’t help that everything with this movie is a total bore. I don’t think any kid wants to sit through a 130 minute bore fest like Mary Poppins Returns but that’s what is going to happen.

The biggest problem with Mary Poppins Returns is by far the ultimate goal of the film or lack there of. You get the sense from the trailer that this movie will be as much of a movie for adults who grew up with the original while also entertaining younger audiences. Throughout the entire film Mary Poppins Returns cannot settle on which direction it wants to go. It demands proper knowledge for the original at times while forcing a stereotypical and easy to digest story for the kids. The thing is those two goals are always battling without trying to find the proper mix.

The great Disney films manage to get a ton of emotion out of the viewers, Mary Poppins Returns doesn’t because of the immense amount of artificial emotion it displays. Besides Emily Blunt, everyone is just putting on a show without any passion behind it. Every single opportunity the film tries to get emotions out of the audience it can’t because it seems no one knows how to display it.

I was very disappointed by Mary Poppins Returns. You’d think with a company like Disney would try and make their films unique but most of the time they don’t and Mary Poppins Returns falls to that trend yet again. This film is worth checking out solely for Emily Blunt’s spectacular portrayal of Mary Poppins but besides that, don’t go in expecting anything else.