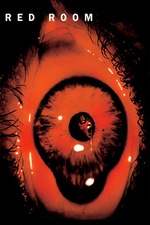 I haven't been doing many reviews lately, but I'm doing a lot today. Red Room is a nice classic video nasty from 1999, directed by Daisuke Yamanouchi. Four people, a husband and wife on hard financial times, a 27 year old woman, and a 17 year old schoolgirl are all getting ready to play the "Forbidden Kings" game. They each choose a card, whoever gets the King card can choose two of the others to do some sort of sordid act upon each other. If you give up (or die) you're out. The last person remaining collects 10 million Yen.

I gave this movie a 3/5 only because it is a classic for me. I saw it when I was very young and it made a big impression on me at the time. I also tend to be very generous when grading the video nastys. There is one scene in particular involving a lightbulb which a lot of people talk about and has given this film a bit of notoriety. When i watched it again today, I felt a bit disappointed by it. The sound effects certainly made me squirm a bit, but not nearly as much as I expected. Definitely overrated, although at the time when it came out it was sure to turn a few heads. The Unearthed release says "Warning: This Film Contains Graphic Violence". I wouldn't take the warning too seriously. It is more the sexual content mixed with a small (yet fairly nasty) amount of violence that makes this film stand out. Don't go running to see it, but if you're a fan of such films and haven't you probably should.