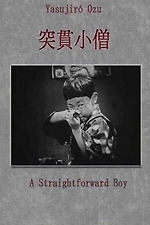 Watched the 22-minute version recently discovered and assembled. While even now nearly half of the original version is missing, this is an absolutely riotous comedy, proving that the Harold Lloyd poster in I Graduated, But... was there for more than just an ironic contrast as Ozu draws heavily from American silents for the style of this. Tomio Aoki is amazing as a little boy who's more trouble than he's worth, as one hapless kidnapper discovers, and for all the sedate framing of the man's abduction, the quiet ways in which the child wrecks his plans can be a scream. (The early business with the boy yanking off the man's fake mustache not with malice but innocent fascination, all as a cop watches nearby, is hilarious.) A potent reminder that while Ozu's postwar talkies would head into wildly different, uncharted stylistic and tonal domain, he was in the beginning a tremendous comedy filmmaker, and it's worth studying how that touch never really left him even in his more ruminative, somber mature period.