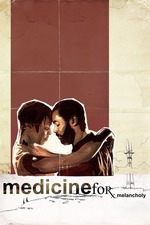 finally got around to watching this (it's been in my netflix list since i saw moonlight the first time last october) since it leaves us netflix july 30! i think my expectations were a little too high since this is a low-budget feature film debut, but it was still better than other debuts i've seen.

some things i liked: the use of color and its relationship to san francisco, the characters' varying stances on race and identity, the stark realism presented throughout, the direction (not as good as moonlight, but barry jenkins still did great here)

some things i didn't like: the cinematography as a whole, the choice to use muted color over black and white, the sound design in general was kind of a mess, the performances were a bit stale?

overall it's interesting to compare to moonlight and look at how far barry jenkins' filmmaking skills have come in the 8 years between his first feature and his second.