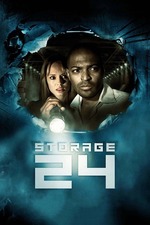 Imagine this is the story of the families on LV426 before the Colonial Marines turned up. Doomed from the beginning, cooped up in the metal gerbil-tubing of a terra-forming station.
A fairly predictable but still eminently watchable movie, brightly lit because the power's still on so you can viscerally see every human paralysed with dread and ripped apart or spun-up in cocoon by the marauding alien foe.
Add in a little cutesy bit in the middle with a robotic dog Trojan Horse (alá Muffit in BSG) that ends horribly. And how about a surprise ending, not aluded to in other films in the cannon, where a terraforming engineer (who looks not unlike Michael Fassbender) escapes in a pod-like rocket on a vague direction in space at the end.....?

I admire Noel Clarke for trying to be a one-man British film industry, this film is fun but the direction and some of the casting lets it down massively and stops it being from being even half-way enjoyable and compares badly coming after Attack the Block which played with the unoriginal Alien crash-landing subject with much more verve and skill.

P.S. How magnificent a pre-side-se-qual does that sound eh, Sir Rid? Sign me up.