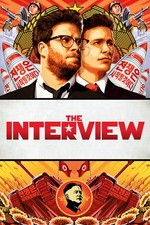 This was an enjoyable comedy film, with loads of hilarious moments all the way throughout. I really enjoyed the comedic and silly start of the film with an interview with a wrapper who comes out as gay and it’s quite funny seeing the reaction to both James Franco and Seth Rogan’s characters who are both brilliant in this film by the way. I thought there reactions was hilarious which really set the tone for me at the start of the film. Then, when they TV news was celebrating their 1000th episode there was some really funny LOTR references which kept getting mentioned throughout. It was quite funny and entertaining coz I’m a massive LOTR fan as well which helped. Other comedic and wild moments I enjoyed was when Seth Rogan had to have a face off with a tiger; is was quite entertaining. Some of the lines during that passage was funny to hear.

I thought there was two hilarious leads in Seth Rogan and the man who I thought stood out to me was James Franco, playing the interviewer I thought he was hilarious with his delivery of his lines and his facial and body language was brilliant. But I really did enjoy the character dynamics both of these characters had in the film. They had a great relationship and there was really funny together comparing themselves to Frodo and Sam from LOTR. Another hilarious character was Kim Jong - Un played by Randall Park. Who had some amazing connections with David (Franco’s character) and they had loads of funny moments together. Especially, the moment in the tank listening to Katie Perry’s song fireworks and Kim getting emotional to the song.

Further on in the film, it develops with the new ideas and concepts of what they want to do with Kim Jong Un, as when we think Franco’s characters changes plans he reveals back to the original plan that he is bad person; as James’ character sees the fake food in the food shop and releases his a liar. As the ending of the film finishes with lots of crazy action including explosive military weapons like a tank and airplane to attempt to escape after ruining their leader on natural TV. These is plenty of action going down in this wild chase of survival.

However, my one main criticism was that in the middle act I thought the film sometimes dragged out a bit and the pacing was a bit too slow for me. Another criticism the comedy rarely never missed but there was a few times it felt forced in the story.

Overall, I would review this film 3.5⭐️ film, I think this comedy is better than your typical throwaway, as I’m more engaged in the crazy story, the likeable characters, the comedy is flowing all throughout and there was a nice adventure at the end of all it all. So I would recommend this comedy as there is some hilarious performances and the script is really funny.