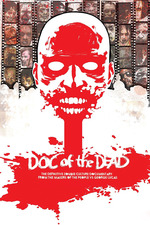 Doc of the Dead

While by no means a substantial documentary, DOC OF THE DEAD is an enjoyable Cliff's Notes-style exploration into the history of the zombie movie, from the earliest voodoo-influenced efforts to George Romero's creation of the flesh-eating ghoul we all know and love today (in 1968's landmark NIGHT OF THE LIVING DEAD), to the mainstream explosion of the last decade.

It's a fun and likeable lightweight documentary with entertaining interview subjects. I wish there were fewer humorous inserts and less indulging in interviews with modern-day survivalist weirdos and mock-serious engagement of the idea that something approximating a zombie apocalypse could actually happen (though that info about the ants and the mind-control fungus was pretty wicked). Also, it would have been nice to hear even one word about zombie films from other countries besides England, especially Italy (hello, anyone heard of Lucio Fulci??)

But there are far worse ways to spend an easy, low-impact 80 minutes on Netflix, especially if you're a horror fan.

From One Second to the Next