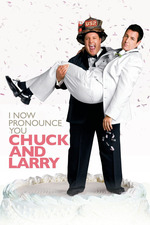 I Now Pronounce You Chuck & Larry

I last reviewed Alexander Payne's Citizen Ruth, a social commentary on fanaticism that used the abortion debate to frame its satirical comedy. It was uneven but then again it was Payne's first film as a director and so some leeway could be granted.

This film started life as another Alexander Payne and Jim Taylor script, ostensibly in the same vein, about marriage and sexuality. I am uncertain exactly what kind of film might have turned out from that original script, but I'm willing to bet that it would have been a million times better than the piece of trash that was produced once Adam Sandler got his grubby mits on it.

Co-starring Kevin James and directed by usual Sandler hack Dennis Dugan, I Now Pronounce You Chuck and Larry is a mean-spirited, unfunny, homophobic nightmare of a film masquerading as social commentary. I'll give the film credit for at least positioning a message of tolerance at the end, but you only get to it after wading through an endless muck of gay stereotypes, homophobic jokes, and the usual Sandler racist-schmucks that show up in most of his films. As is the case with most Happy Madison productions, this film seems made from some kind of anti-comedy element that sucks all of the funny out of every inch of the frame. None of the jokes come close to getting even a cursory chuckle.

Sandler and James are a well-matched pair though, only in regards to the fact that they are both insufferable assholes throughout the film. I'm pretty sure that's not even what was intended by the film makers, it's just the usual persona that Sandler portrays (and James gets saddled with it simply by sharing the screen with him.) That's not to say that Sandler can't be in comedies that have some semblance of a heart, there are emotional moments that work in both Big Daddy and Click (few and far between though they might be), but he fails miserably at conveying that same kind of effect here.

You can cry for the film that might have been, but that doesn't change the fact that the film we got is a reprehensible pile of garbage. The message might be on the right track, but the journey to get to said message is the most bass ackwards way of getting there I've ever seen. Of all the Happy Madison productions, this one is one of the most deplorable.