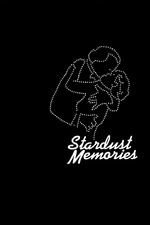 I've made no mistake of my love for Federico Fellini's masterpiece 8 1/2 (just look at my avatar for god's sake), so judging Woody Allen's Stardust Memories is an interesting proposition to me. This film is not just an homage to Fellini's film, in some respects it's an outright ripoff. And yet, there are certainly qualities about this film that put it right with the rest of Allen's masterworks of the era, but only when viewed from a certain light.

The story should sound eerily familiar to anyone who's seen the 1963 film. A film director going through a career retrospective (and a mid-life/mid-career crisis at the same time) retreats into his own subconscious and revisits the women who served as his inspirations over the years. The film takes a less, for lack of a better word, Fellini-esque approach to the material, and provides a bit more psychological meat to chew on, but apart from that this film is cut wholesale from the same cloth as 8 1/2.

But yet the biographical qualities of this film cannot really be overstated. Stardust Memories almost mirrors the rise to fame of Woody Allen as a filmmaker himself. Having been burdened with strong genre hits early in his career, he now attempts to break the mold and create more artistically driven films. One can argue that it would be a little early in Allen's career for him to be having such an existential crisis, but given Allen's neurotic persona it's not really surprising. Taken as an autobiography, the power of this film from a narrative perspective improves dramatically, and Allen's own performance in the lead role ranks as some of his better work as an actor.

However, it should be noted that Allen did not intend for this to be some sort of autobiographical sketch on himself, despite the similarities. The comparisons are impossible to avoid, given that the story of Sandy Bates mirrors that of Allen's own rise to fame (that of his fans preferring his earlier genre work over his more artistic endeavors), but that was never Allen's intentions. So, if we view things from Allen's own view, this film is still a decent one, but loses a lot of its narrative punch.

The writing is good, about typical for a Woody Allen film of its day and age, and the acting is generally good as well, with only Charlotte Rampling turning in an Oscar-caliber performance in the film. The comedy is verbiage based, as per Allen's evolving style, and while the film isn't as funny as Annie Hall, it does have its moments. Gordon Willis' cinematography is spectacular, however, as good as anything else produced this year (and considering the competition, that's high praise.)

Your opinions on this film will vary wildly. If you are not a fan of Woody Allen's work or you are only familiar with the highlights of his ouvere, then this film will probably not satisfy you. Those who appreciate Fellini's film (such as myself) will have trouble separating that film from this one, at times. And really the crux of the matter is whether you approach this film with your own interpretation or that of Allen's. Going with the former, this is a deeply personal film that explores artistic subconsciousness, maybe not as provocatively as Fellini (or David Lynch, certainly), but it still succeeds on many levels. From the latter perspective, this is only somewhat effective, and doesn't hold up against the masterpieces of the day, yet still remains a near great film. I tend to fall more in the former category, despite the film's shortcomings.