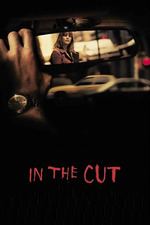 What is "disarticulation" exactly?

Being frightened by an attraction, finding attraction in being frightened. A teacher of English and linguistics, Meg Ryan's Frannie Avery (never more drably made-up, never more stunningly watchable) finds herself entangled by the latter manifestation of semiotic "play." As she says at one point, she's "scared of what she wants," drawn to Mark Ruffalo's Detective Malloy because he can do things to her body she never thought possible, but who may also do things to her body that no one wants to think are possible.

Like a Rom-Com met cute with a Lars Von Trier film, In the Cut exists in and examines states that are challenging to articulate. This is being "in the cut," a double entendre representative of grisly violence and orgasmic cunnilingus that exemplifies the disarticulations of meaning that litter the film. In the dialog, characters speak over one another, interrupt, and misinterpret; in the plot, tropes from Rom-Coms and thrillers get all jumbled up; in the color grading, pukey greens and yellows are splashed with vibrant reds; in the theme, sexual pleasure and sexual threat keep getting confused. In the Cut is both meanings of disarticulation simultaneously, concerned with the butchering of women's bodies and the disruption of coherency. Hard to imagine a better statement on post-9/11 disorientation or the state so many women exist within, not knowing if the man in their bed wants to make love or mutilate them.