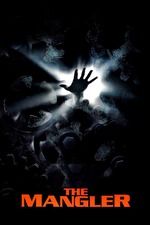 One drawback to the very clean Blu-Ray release that came out this last week: the climax, which seemed a pinnacle of discretion and chiaroscuro suggestion - in the annals of 90's CGI, anyway - in which so much seemed obscured by shadows and lighting, does not fare well in Hi-Def, and, yes, the CGI beastie is right there, clear as day, a CGI beastie. The stone sewer catacomb and its rising pillars also - which before repeatedly impressed me for their grandeur - suddenly look like cardboard.

That said, this is the quaint (in concept, the South African location shooting gives it a weird aura that makes sure its Americana is only as functional as it remains conceptual), socialist, muckraking nonsense opera - a "nonsopera" - that can only be made once, with feeling.

Another big disappointment of the recent Blu-Ray is the Behind the Scenes compilation. I was lucky enough to see some more of the BTS footage than was included on the (short) featurette (I'm an acquaintance of an acquaintance of Hooper's son William), and what you'll miss seeing is some great footage of Hooper filming the climactic sequence of the film, where the three protagonists witness then flee a mangler come-to-life, and urging the three actors to keep "their heads together" - "Put your heads together, close as possible! Keep them together!" - while operating a flash bulb and cuing some wind machines. 66.media.tumblr.com/tumblr_l9ul2m5kJD1qbw9zko1_500.jpg