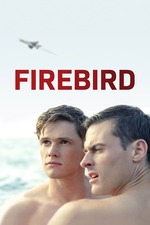 If you’re a gay man of a certain age, you’ve more than likely already seen this film at least dozen times before, only with different costumes and accents. Even though it’s based on a true story from Cold War-era Estonia, it won’t exactly come as stunning revelation to anyone that homophobia sucked pretty bad in that context, as it always does, everywhere. The film is more than competently executed, and it obviously had a much bigger budget at its disposal than 99% of the queer films that somehow managed to get made over the last few years. They could even afford semi-convincing CGI for the Mig jet scenes!

I suspect that the major reason for this embarrassment of riches is Tom Prior’s involvement as both a producer and co-writer. It’s clearly another phase in his plan to replicate Eddie Redmayne’s career, but with better abs and much bigger pecs. He’s decent enough in the leading role of the lovelorn hottie, however, his tendency to do the bulk of his acting with his mouth becomes slightly off-putting after a while.

If you really feel compelled to revisit this story yet again, I suppose there are worse ways to scratch that itch. Like Free Fall, for instance.