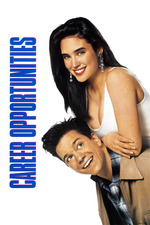 Yes, Jennifer Connolly is very attractive, I know; now shut it and move on with my review you damn pervs!!

Really, this was the movie John Hughes was ashamed of? The man who wrote Baby's Day Out and Beethoven was more ashamed of this?! It's pretty harmless, fitting in nicely as one of the last good John Hughes movies.

Despite its bizarre last act shift that isn't the Home Alone clone that one would expect, an abrupt ending, and feels a bit aimless in some parts, it's mainly made up for by the near sharp script, nice directing for first time director Bryan Gordon, a kicking soundtrack that only Hughes could conjure up, and excellent performances from the main leads.

I wish it kept up with the Breakfast Club motif it started with; otherwise, this could have been the last great John Hughes movie before his mediocre decline. Close to 3½ stars if ya truly care.