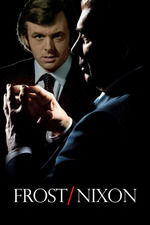 When daily conversations appear hinged on topics such as corruption and presidential misdemeanor, what better time to visit a cinematic, informal, presidential debate. Nixon/Frost achieves an initially commendable thing, which is taking a snapshot of real life and of real people, and then revolve its story this event, instead of jumping headfirst into the pitfall of telling the complete story of either Nixon or Frost. The filmmakers, here, have decided to zoom in on the events leading up to the revelatory interview between the aforementioned two, slowly building up to the groundbreaking, real-life climax.

Howard commands a run-of-the-mill ship as he frames the interview in two ways to neither of which he fully commits. The manner in which the final interview is build-up reminds one of boxing films, but here the jabs come in shocking and stunning sentences, but nowhere near the intended hard-hitting knockouts. A more interesting focus that is taken up in the latter part of the film is Howard’s sudden focus on the Nixon and Frost characters as reflections of each other. Here, all involved clearly have a lot more to say, and you can genuinely find some passion in the interplay between Sheen and Langella, the latter of which embraces his character wholeheartedly. In all the scenes he is in, Langella actually manages to convey competing emotions and nuances to the character of the corrupt Nixon.