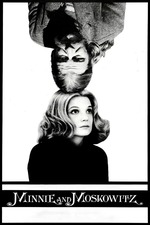 This could so easily be recut into a horror film about men projecting their desires and insecurities onto Gena Rowlands. But as it is, it’s a strange movie about an emotionally shallow but righteous schlub who shoots for the stars, traps a broken one, and refuses to let go. You kind of feel like Minnie could do better, but seeing her previous track record with men, she could also do a lot worse. In that way it is indeed the true American Hollywood romance: needy and insecure woman marries emotionally available guy who punches walls instead of her face and they both try their best to find some semblance of normalcy.

The scenes with the mothers (played by Rowlands’ and Cassavetes’ real moms!) was so goddamn gloriously perfect it wiped away all of the creepiness from the first half of the film, which is basically an hour and a half of Gena Rowlands getting punched or running away from men trying to physically trap her. Great acting all around from literally everybody in this entire movie (except Cassavetes himself? He didn’t ring as true as that guy for me... needed a little more charm and a little more sleaze.)

I get the sense this is in some way the story of real life Rowlands and Cassavetes marriage... maybe I’m projecting.