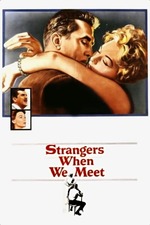 Hm, an interesting film that I don't think fully accomplishes what it sets out to do but is an intriguing and enjoyable watch nonetheless. It's a movie about an affair, but it's also about the fickle love affair of the talent chasing his inspiration. When our muses leave us – through self doubt, stagnation or complacency – we falsely look to other people to fill the void. Kirk Douglas has a loving wife and children, a marriage he's content with, but he's so comfortable that he's stagnated in his career and desires a challenge. Then comes Kim Novak, lonely in a marriage that's cooled beyond her needs, and the two just so happen to click at the right place in the right time. They don't actually have anything in common, and their struggles are entirely different, but their struggles just so happen to match in the moment. He pays physical attention to her, and she allows him to show off; a steamy bandaid on their larger issues. In that way, Strangers When We Meet is pretty brilliant in that it doesn't buy into the concept that infidelity occurs because of some desire for "true love" or even out of any specific 'fault' of the current partner. It's more like a welcome temporary relief from a larger itch that the instigator falsely believes they can't scratch alone. A dissatisfaction born out of a lack of belief in their and/or their partner's ability to grow. That this affair was only a temporary occurrence is further hammered home in how he, having since recovered his muse, leaves Novak in the dust when push comes to shove.

There's a real honesty in this that I can appreciate for a movie that came out in 1960. It leaves a moralistic gray area that you don't normally see in these types of films. Comparisons to Sirk are apt. But the movie left me feeling kind of cold to everybody involved... it didn't connect with me emotionally at all. In one of the first scenes Kim Novak calls out another character as writing "false women" who seem shallow and I'm not entirely sure this movie is actually any better. That women are treated as interchangeably discardable is most definitely a purposeful focal point of the story – there's three different types of chauvinism on display (the writer who changes girlfriends every week, the family man who takes a single mistress and then the minute-by-minute jockey who takes advantage of whatever situation comes around) and it all comes across as equally obnoxious, no matter the degree. There's a great scene with Walter Matthau and Kirk Douglas in the rain where Douglas is about to slug Matthau for trying to put the moves on his wife but Mattahau rightly points out "whats the difference between you and me?" But beyond Kim Novak you don't really get any sense of what these women need or want, and even then it doesn't seem to extend beyond emotional neediness. I guess that's 1960 for you, suburban housewives didn't have much else to be, but it would have been nice to include some glimmer of a hope that once was.