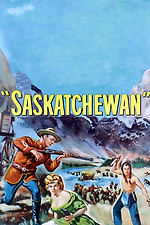 It's all about retiring from societe, seeking for the perpetual presence of the sublime. Retaining the spirit of infancy to manhood and the kind cinematic figure of Alan Ladd.

Raoul Walsh like Emerson, decribes the nature as the analogical refelection of a human's spirit. You don't look at it with your eyes, there goes the difference between ( la nature-vue et la nature-vecue ). The first is corny, flat, a surface, the second is the anteroom, there were the spirit goes along.
The opening shot, is a sky, cut down in two, by a big tree and an imposing rock. It looks like both elements worship eachother but it ain't. Walsh's telluric politics is all about the struggle for having the most space, to be first in sight, to impose while there's a horde passing by.

Dusty terrestrial poetry, people just having a race down the mountains for fun, a wind blowing dust in one's eye while speaking about the massacre of Custer.
Some animal sounds while someone ask to another denominationally '' i was wondering about something. ''

the mist raising there like in a fairy tale
the mind is set back in the home country
like in The Big trail, la nature-vécue, retirement and sharing the emotions of an angel.

Where do you come from ? From under a burning wagon.
What kind of a greeting is that ?

Walsh's logic is confusion,
the confusion of the heart, it streams to you but your crossing upstream. Things are said in a haunting way whitout neglecting the big laugh, the tender humour.
Things are just said, that's the confusion, you don't want to flatter the system, but destroy it from the inside.
Steal a grey pony from a general while he's drunk or seeking a dream by creating yourself the system of it. You want to be chief of a tribe ? Raise one sir.
It's not rebellion, just a way to make a system more human, more brotherly.

When Ladd comes back from the mountains, in one phrase, he symbolize all the struggle and futility of society.
'' How peacefull and quiet it was in the Mountains ''