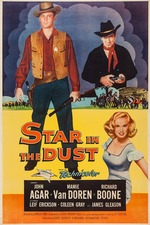 Describes human condition and behavior in its purest complexity better than any psychological movie you've ever seen.
Every answer of one's attitude towards a situation is directly reflected by an external attribute.
Symbolism whitout any symbols, the unknow art of straightforwardness.

Life is a confusion, life should be sang, like the wandering poet, entracting every episode in the film.

As reffering to the title of Kiarostami, '' Life, and Nothing More… ''. Life is a series of moments, people are landlocked in their beliefs before bursting because of a heartache.

Boone contradicting himself before being hanged is a thing of beauty. Watching the sun, before in his ironic belief, the sun is setting for him for the hanging. The time chosen by the judge for the hanging is not existing anymore, because his personal belief predominate the moment.

A Star in the Dust, is a contemplation of daily life things and rectangularity.