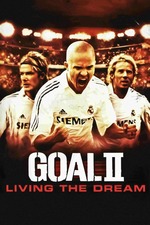 The first Goal film was about as clichéd as you could get, but it was also a good amount of fun, the sequel has all of the clichés but not so much of the fun to go with it. Santiago has transferred to Real Madrid and with that comes everything you would expect. He lets the fame goes to his head, becomes a bit of a prick, cheats on his girlfriend, then of course realises where he came from and sees the error of his ways. It's uninteresting stuff overall.

The football scenes are done very well here though. The actors are added to real scenes and it works well. There's a ton of footage that must have been filmed during real training sessions and pre game talks. I'd love to see a making of documentary for the film, I think it would be interesting.

The plot is a bit of a mess with a kid who is Santiago's brother that kind of goes nowhere and is just used as a reason for him remembering that he started off as a poor kid playing football in the streets. It's pretty lazy and not at all fleshed out. Then the whole girlfriend plot doesn't even get an ending, just a to be continued title at the end of the film.

It's certainly still watchable but a step down from the first film and everything I've heard about the third sounds like that's an even bigger step down.