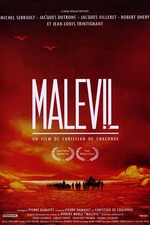 Malevil takes the apocalypse in the direction it needs to go with a serious film on the subject and that direction is depressing and full of dread. A group of survivors that happened to be in a wine cellar when the disaster hit. They attempt to grow food, search for water and look for other survivors. What I liked about the film is that it didn't go down the usual route of having the group squabble amongst themselves. They all get on just fine and it works well and the inner tension just isn't needed.

When another group of survivors are found living in a tunnel, even that goes smoothly at first as they trade items and seem pretty peaceful. But that soon falls apart as the two groups go to war with each other. This is actually the weakest part of the film oddly enough. I was enjoying watching the group slowly build a life out of the ruins of the world and felt that the conflict with the other group ruins the flow of things. Then there is the ending which I can see people not liking at all but I enjoyed it. It comes from nowhere and seems so strange after we have gotten used to the new way of life post apocalypse.

Malevil is a film that doesn't deserve to be as obscure a it is. It reminded me a lot of Haneke's Time of the Wolf and I actually preferred this to that one. Its slowly paced and could bore some people, but I felt it grabbed me and I was along for the ride and ended up enjoying the film quite a bit.