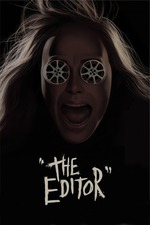 The Editor hits a lot of the right notes when trying to emulate the giallo films of the 70s. The fact some of the characters are dubbed works really well and the delivery is perfect. There are a lot of elements that are incorporated into the story too. The way all the men hit the women and it’s all forgotten about seconds later is something I’ve noticed in giallo films having watched a few recently.

Story wise the film works well and even gets a bit convoluted and started to almost loose me, which in a way is good as that is something that often happens with me watching the real thing. There are some good kills, I liked an early one with a character having his throat slit and the blood pouring all over the lady he was hunched over.

There were a few things missing from the film. For instance there was no J&B which would have been a nice touch. The title of the film I also felt could have had a more Giallo feel. Something like ‘The Swift Cuts of the Editors Knife’ or something of the ilk. The comedy works most of the time and overall I had a good time with the film. It’s a brave move to do a spoof of the giallo genre, as it’s hardly the most popular or known. I can see this film leaving a lot of people rather confused.