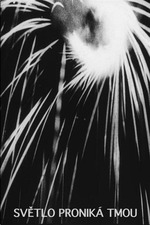 The Light Penetrates the Dark

In order to get an idea of what the “kinetic electric light show” of Pešánek’s “Edisonka” (The Light-Kinetic Sculpture for the Edison Transformer Station in Prague; designed in successive stages during 1926-1930; in function till at least 1936) looked like, let’s quote the artist’s own description of the changes occurring in the sculpture during the space of eight bars (each bar lasted five seconds) of his kinetic composition “Spring Song”.

FIRST BAR: The wall behind the sculpture begins to light up from complete darkness with yellow and white color until the maximum intensity of bright yellow color is achieved.
SECOND BAR: The sphere lights up white-yellow. The illumination begins following a clockwise direction. Lightbulb no. 1 lights up and remains lit, behind it no. 2 lights up, then no. 3 etc. At the end lights within the circle go out in a clock-wise direction. This pattern is then repeated. The yellow and white light behind the sculpture, as background, is fully lit.
THIRD BAR: The pattern for the circle is repeated. During the first beat, i.e. the 1st second, the vertical section is illuminated with red and white (= pink). The yellow-white light in the background remains fully lit.
FOURTH BAR: The whole pattern is repeated using green and white lights. The yellow light behind the sculpture slowly disappears over the whole bar. Only the white light remains.
FIFTH BAR: While the green-yellow light in the sphere disappears during the 1st second in a clockwise direction, the pink light illuminates the vertical section. An undulating movement begins in horizontal section no. 1, moving from left to right and back again. In horizontal no. 2 the wave moves from right to left and back again during the next few seconds. This pattern is repeated. During the 1st second the vertical flashes with pink lights. In the background, the yellow light fuses into white.
This configuration is repeated in the sixth and seventh bars but, again, without the yellow; just the white light remains in the background.
SEVENTH BAR: A single pink light moves round and round the sphere in an anti-clockwise direction, a total of five times. The vertical section is illuminated throughout the bar; the movement in the horizontals stops during the 1st second. The white light in the background gradually merges with red.
EIGHTH BAR: The pink light remains in the background. At the end of the seventh bar, during the first half of the 1st second of the eight, the vertical, still off at this point, again lights up with red and white light bulbs, from the very bottom to the top; then it goes out again. This is repeated in the second half of the 1st second, then again three more times (in each of the subsequent quarter-seconds); the bar then ends with a pause. Only the pink light in the background remains.

In the context of the avant-garde art of the 1920s, there was only one artist, next to Zdeněk Pešánek, who dedicated himself to the phenomenon of light in kinetic art, with the parallel endeavor to expand it in a multi-media spatial environment — László Moholy-Nagy (his “Light and Space Modulator”; renamed as “Light Requisites”). Unlike Moholy-Nagy who was working towards conceptually universalist and structurally conceived interior installations, Pešánek was inspired by the luminous shapes of advertisements, the Baroque tradition of the color-piano, illuminated festival decorations and theaters and later by the impulses of color music which led him to formulate his conception of the illuminated environment of the night city.

The Light-Kinetic Sculpture for the Edison Transformer Station in Prague is the first ever kinetic sculpture installed in public space (1930) and Zdeněk Pešánek is the author of the first ever published book about kinetic art called “Kinetic Art / Kinetics in Art — Color Music” (1941).

The fact that Frank Popper, the author of several synoptic works on kinetic art, comes from Czechoslovakia and nonetheless completely neglects Pešánek in his publications indicates the degree of the disproportion between the importance of Pešánek’s pioneering work and his appraisal in art historical criticism thus far.

Zdeněk Pešánek was born in the city of Kutná Hora where his mother’s brothers Josef and Antonín Mölzer continued the organ-making tradition established by their father Antonín and his older brother Václav Michal, the founder of the company (in Kutná Hora in 1859). The Mölzer workshop produced Bohemia’s first pneumatic organ (1888) built chiefly by Josef Mölzer who made the organ for Prague’s St. Vitus’ Cathedral. The third of the three brothers, Pešánek’s godfather Eustach Mölzer, was experimenting with the use of electricity in organ-making. He became an expert in the field of water and bridge construction, and the transportation, urbanization and electrification of Prague. In 1923 he was appointed Chairman of the Board of Directors for Prague’s Electricity Companies. Zdeněk Pešánek was brought up in his grandfather Antonín’s organ-making workshop. In later years, this family background had significant influence over his artistic thinking when his conception of kinetic art was developing, rooted in the fusion of art and technology using the principle of the mechanical color piano.

“The Light-Kinetic Sculpture for the Edison Transformer Station” was preceded by series of designs of “Spectrophone” (as Zdeněk Pešánek called his color-piano). His first spectrophone was initially a pure, visual example of kinetic art (he did not originally consider bringing in music). In his first spectrophone, he fused the Purist aesthetics of form based on Plato’s laws of immutable ideas and focussed on the classical, i.e. static image, with the poetist aesthetics of light which he set in motion when formulating his principles taken from color music. His first spectrophone, which in fact laid the foundation for his light-kinetic sculpture works, was, from the point of view of uniting color (colored light) with form, a less perfect kinetic method than film or reflectory play. At the beginning of 1926 Pešánek had the idea to join the light keyboard of the spectrophone to the eight-octave musical keyboard, i.e. to effect the union of color kinetics with the music tones. In 1928 the composer Ervín Schulhoff performed on the second version of Pešánek’s spectrophone. The program contained several works by Alexander Scriabin, a champion of color music. Zdeněk Pešánek designed his second color-piano in the knowledge that tone, color, and shape were independent phenomena. The innovative aspect consisted in the maximum extent to which the mutual joining of tone, color, and shape would be possible. (Similar experiments outside Czechoslovakia were carried on at that time by Alexander László, Ludwig Hierschfeld Mack, Kurt Schwedtfeger and Vladimir Baranoff-Rossiné.) The same year (1928) he entered into cooperation with the Deaf-Mute Institute in Prague and Brno, but this time decided to use the first model. Alongside Castel’s utopian idea to enable deaf people to enjoy music, he hoped that in this way he would be able to acquire the means to construct a more perfect spectrophone, his third. It was his wish that the art of color music be as much a part of society as music itself. He intended to develop a standard type of instrument, produced in large series.

Today we cannot possibly imagine the optimistic, vital feeling experienced by the new artistic generation after the WW1. A member of this generation, one of the Devětsil art group, architect Karel Honzík, doubted in his recollection “whether it is in the power of words to communicate to the next generation the intoxication we experienced.” He wrote that all their artistic endeavors were “in fact, vain attempts to capture the fleeting sense of joy with material means. We sent our nerves like root capillaries to the finger of the whole planet, to the universe around us and within us. It was a joy born of a synchronic and versatile vision of the world and reality which new technological means put before us. It was known that within a short time, we would be able to hear the sounds of the whole world and even the universe, to feel the globe, to be able to smell all its fragrances and odors. The feeling of world omnipresence was simply new, unfamiliar until then. However, this was not just about a passive perception of the world’s beauty. It was clear that science and technology were able to recreate the world in order to fill it with yet more beauty. And the social revolution was to provide the beauty of a natural and newly created universe for all people without regard for class or caste. We were carried over with some kind of feather-lightness to a distant future with the absolute conviction that we would enter it tomorrow, the day after or perhaps within only a few minutes.”

Work of Zdeněk Pešánek is based on the ideas of the Czech avant-garde movement as represented by the “S. M. K. Devětsil“, with its program of construction and poetry, of Constructivism and Poetism. The most significant achievements of this program were image poems — a combination of typographic composition, collages, and photomontages. Through the principle of the joining of diverse media and elements, the image poems inspired Pešánek’s works. It can be said that his works from the 1930s most consistently implemented Devětsil’s vision as expressed by the phrases “poetry for all of the senses” or “ultraviolet reality”, which most vividly summarize the uniqueness of Devětsil’s programme in the international context. Ironically, this happened when Devětsil no longer existed (the poetic constructivism of Devětsil had broken into two opposing currents — Surrealism and Functionalism), and the creators of its programme paid no attention to Pešánek’s work.

Probably the most effective promotion of “The Light-Kinetic Sculpture for the Edison Transformer Station” was the screening of the short avant-garde film “Light Penetrates the Darkness” which was made by two young film-makers, F. Pilát and O. Vávra, according to the story devised by Pešánek. They based it on the artistic and contemporary musical theory of feelings evoked by the form of the artist’s work combining the horizontal, the vertical and the sphere. They included in the film a so-called emotional form of rapid-montage to which they had been inspired after seeing the films of Eisenstein and Pudovkin and whose rhythm was inspired by Pešánek’s light-kinetic sculpture. The prosperity of the illuminated city of Prague and global electrical communication is symbolized in the film by the “Edisonka” and its interpretation of their four fundamental motifs: electric light bulbs, electric lamp posts, electric coil and a globe encircled with wires.

Side note 1: Zdeněk Pešánek intended (around 1930) to make a film collage called “Birth of the Universe”, but this project got stuck in the phase of a script. Only later (in 1996) Janka Vidová-Žáčková based on it made her own film interpretation.

Side note 2: Zdeněk Pešánek also made a sculpture called “Film” (1928) where the filmstrip is reaching up to the ring of the Saturn planet and even beyond.

A Tale of Africa