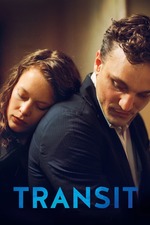 I already thought that Petzold's previous picture, Phoenix, was left unfairly unnoticed by many, and now the same seems to happen to his newest effort, Transit. It again brings back to life an unforgotten classic. In Phoenix it was Vertigo that was translated to postwar Berlin; Now Casablanca recovers its roots at the intersection of a World War II France, and a contemporary France, not knowing how to deal with the immense amount of illegal refugees (in both periods).

Petzold very cleverly uses the political power of cinema in Transit. He borrows from our collective memory, from what we know about World War II. It is sufficient to very lightly grasp this topic, since we are already shaped in this regard, with films, literature, and tons of archival material. This all permits Petzold to tell the story of today, or actually of the horrors of today, of the refugees that have no home. They are lost is a world without a place to return to, nowhere safe. This, however, also never is the main concern of the plot. It is the main character, played by Franz Rogowski, who plays an immensly lovable role that will stick with you. He balances in-between these very different, and at the same time, not so very different for some, times, while also being entangled in a Casablanca-like relationship. Sounds complicated? It most certainly is, but it really pays off in the end.