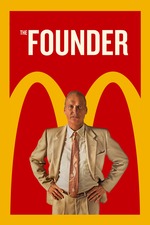 Overall a good film, certainly a story worth telling despite its fairly uniform concept. The naive, wholesome businessmen get outplayed and taken advantage of by a ambitious and financially driven philanthropist. It also may fall victim to its already well known story and did more to shine a light on the McDonald brothers rather than Ray Kroc.

Keaton does well in this role as a charismatic businessman and does well to portray the drive and 'persistence' that is mentioned in the film. There are parts that did suggest the transition from family focused to strictly business for Kroc was a bit rushed and couldve used 15-20 minutes of screen time to demonstrate this. Same could've applied for his relationship with his former and new wife.

Maybe if the McDonald brothers didn't innovate, someone else may have. Nonetheless, obesity and subsequent conditions have grown to a huge societal and health burden with fast food and highly processed foods across developed and Western countries being so prevalent. From that, Health scientists and public health officers wouldn't be a career path for suburban university students who work at a supermarket. So vKemps should be thankful for the 'speedee system' and Ray Kroc.