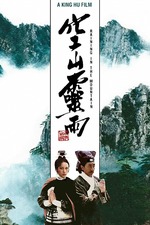 Raining in the Mountain

Raining in the Mountain 1979

Another of Hu’s game spaces surrounded by nature and continually threatening complete dissolution — or is it transcendence? — into abstraction in the sunlight scattered through the lens as the camera dollies and pans; the cutting, sound, cutting on sound, invite synesthetic thought or simple poetic (spiritual) association, drums and bells tingling the ears or vibrating in the chest as light bends around pillars and walls, pours through deep mists, and casts blinding glare on one side of the temple while the other is draped in the afternoon’s shadows. Like the inn films, it’s as much, or more, about anticipation, lines of sight, and shuffling strategy as it is about combat — temple and nature alike direct and redirect vision, the former arranging players as graphic elements, the latter almost entrapping those who come to it with greed and vanity, and associating with those who flow with it (the layman Buddhist’s female attendants’ formations and acrobatics linked to tree groves and the movement of water over stone).

Action arrives not as culmination of affect (the vengeance and political motivations of The Fate of Lee Khan), but as a debasement, appropriately violent in its rapid montage. One is what one brings to the temple, and forces, internal and external, move towards balance in the separation of the sacred from the material. It does not do to play games with the sun.