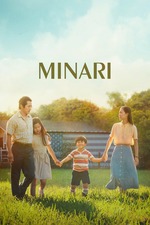 There is a line in Lee Issac Chung's beautiful film that expresses my feelings about the film. "Minari is wonderful!" Ever since this premiered at Sundance of this year, this film has intrigued me from its premise to Yeun leading the film and the backstory regarding the film. I paid little to no attention towards the marketing or trailers that were released, basically going in blind. If you are unaware, Minari stars Steven Yeun, Han Ye-ri, Youn Yuh-jung, Alan S Kim and Will Patton. The film follows the Yi family as they navigate a new area and struggling to get by economically as the world constantly changes. This film presents itself like an Ozu film, with its wholesome and uplifting script and characters. Minari deserves every amount of praise that it has been handed to. This film is a beautiful, quiet, and personal portrayal of the American Dream, love, family, faith and the power of hope.

I was not expected to relate towards this film. However, I connected with this film far more than I realized. My apologies for getting personal, but my family is getting by. We do what we can and are grateful for the successes that has been given to us. However when watching this film I couldn’t help connect Jacob Yi to my father, my father is a man that works hand and fist to keep our family afloat, but with family dilemmas and backstabbings within a family business doesn’t allow my father to be fully satisfied. And once things start to look up for him, there's always a catch that ends up weakening him as a worker, sometimes thinking he's "less of a man". My father, like Jacob, thrives off the happiness of my family and the jokes and good times we share with one another. There are times, especially throughout my childhood and teen-hood, that my parents fought and unfortunately would end in threats of divorce and its up to myself and my siblings to keep each one of us under control.

This film is a beautiful and honest depiction of the American Dream and the troubles to be fully satisfied with one's own work. The acting is absolutely phenomenal, personally thinking Steven Yeun deserves a Best Actor nomination. The directing and screenplay is wonderful, charismatic and makes it stand out among other films that come before it. The music is enchantingly beautiful, every track feels sincere and fits the film perfectly. Please see this film. I hate to say this with many recent releases but this is my favorite film of the year so far and I'll be damn surprised if something comes along and tops it!

Pirates of the Caribbean: The Curse of the…