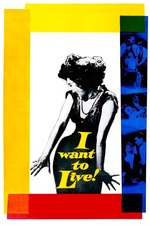 I Want to Live!

Don’t even know where to begin with this one. The opening title card is a brief passage stating that all the events depicted are factual, so the film immediately sets itself up as this “real” interpretation of Barbara Graham—a woman convicted of murder— and her last years. (A glance at the film’s wiki describes I Want to Live! as “somewhat fictionalized”.) Like many “based on a true story” films, it suffers from inconsistent pacing, trying to quickly establish one’s entire character in the first hour and moving at a glacial pace in the second. However, I was completely enamored by Susan Hayward’s performance the entire time, and the great editing and soundtrack made this an incredible watch. While the film breezed by events in the first half, the last thirty minutes are some of the most slow and nerve-racking moments I’ve ever seen on film. Back and forth, Barbara Graham is shown in the last hours of her life as the camera extensively details the process of preparing a prison gas chamber. The effect is very unsettling, and leaves an impression long after the film ends.

vincent price was 6′4″ is using Letterboxd to share film reviews and lists with friends. Join here.