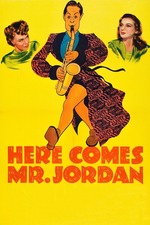 Excellent fantasy romantic comedy of a fighter who after being accidentally prematurely sent to heaven is forced to occupy a new body on earth. There are many plot twists and contrivances, but thanks to the sincerity of the cast - and a great original story and screenplay; both won Academy Awards - the film never ceases to be appealing.

The film's most outstanding aspect was its first rate cast who all gave great performances. Robert Montgomery is extremely likable in the lead as Joe Pendleton, a fighter denied his chance at the heavyweight championship. Montgomery does the comical anger bit brilliantly, especially in the scenes immediately after he is transported up to heaven too soon. His delivery of lines is full of great comedic timing.

Claude Rains is his usual inimitable self as Mr. Jordan, the heavenly boss of deceased souls. Watching Mr. Jordan cunningly persuade Joe to inhabit the body of a murdered corrupt businessman was simply great because of his devilish sense of knowing what is pre-ordained. James Gleason is a particular standout as disbelieving manager. When he is on screen; his portrayal of the perpetually confused Max Corkle, having conversations with the invisible Pendleton, is one of the great comic performances of all time. He steals every scene he is in.

Edward Everett Horton is funny in his usual bumbling role, this time as the angel who prematurely delivers Joe Pendleton to heaven. Evelyn Keyes plays the love interest well. Finally, Rita Johnson and John Emery are good as the Farnsworth's murderous wife and secretary.