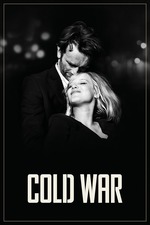 Throughout the runtime it feels like something is missing
As a romance movie, it works, to an extend. It wasn't believable at first, and despite the short length, it takes a lot to get there, but it was the highlight.
As a movie in 2018, as movie set against the Cold War and as a character study, intended or not, it kind of fails. You know, if Pawlikowski handed me this script I would 100% tell him to re-write some parts.
But it's hard not to fall in love with something so helpless. And haunting.
It's hard not to fall in love with Joanna Kulig every second she's on screen.
And every song she sings. And when she dances, I don't think I'm ever going to erase these pictures from my mind.
It's hard not to adore Pawlikowski's version of bygone eras, jazz music, and hopeless romanticism.
It's hard not to fall for this mesmerizing black and white cinematography.

You could say that the ending is a "happy" one but I still feel sort of heartbroken. Maybe because it was really more tragic and bleak than it looked. And there was definitely more to it.
I'm a sucker for a story of two people finding each other through the years, and this one is fantastic even though movies like Atonement, The Curious Case of Benjamin Button, and the Before trilogy did it better. Despite its flaws, and the fact that I still probably prefer Ida, I'll admit that Cold War moved me head-to-toe and I can't wait to watch it again.