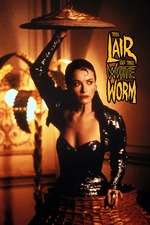 I went into Lair as a Ken Russell virgin, which I suppose makes me a worthy sacrifice, if not for the snake god, Dionin, then for Russell’s brand of high-trash, jaw-dropping vulgarity. Here, he reimagines Bram Stoker’s tale which draws upon on the legend of the Lambton Worm.

There are the usual ancient oaks, stately manors, and ancestral curses you might expect from gothic horror, but this being Russell, he’s way more interested in the immortal priestess, Lady Sylvia (Amanda Donohoe) than anything or anyone else in the film. But who could blame him? With high style, she makes a meal out of not only every man in her bite radius but also each and every delicious one-liner.

At one point, while seducing a clueless Boy Scout, with fangs bared, our lithe, lingeried enchantress literally chomps the poor lad’s chode. Which is to say that despite Lair’s sublime terror, acid trip sacrilege, and biblical meets paganism imagery, the film has it’s forked tongue planted firmly in its cheek. This became clear to me upon first glimpse of the ashen worm, which, far from looking like the subtlest beast of all the field, instead resembled something I won last year at the Boone County Fair.