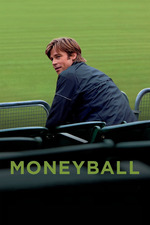 I’ve seen a few people bring up that the Oakland A’s had one of the best rotations in baseball during this season, a fact that never once comes up during the film. The only acknowledgment of a starting pitcher at all is during a patented walk-and-talk in which Beane tells Tim Hudson to trust his slider. But this movie also elides the presence of Miguel Tejada, who earned MVP honors(!) and had more RBIs in 2002 than anyone will probably have in 2021, and Billy Koch, who saw more games than any other pitcher in the American League that year and was awarded the AL Rolaids Relief Man Award for his efforts. (It’s just Reliever of the Year now.) I get that Oakland has a substantially smaller payroll than the Yankees but it’s hilarious how the movie paints them as clueless amateurs in a David-and-Goliath fight.

I still cried like six times. The Hatteberg home run sequence is as hair-raising as it gets but the moment that touched me the most was when Beane first shows up at his house to give him another shot in the majors. The way he and his wife embrace the second Beane leaves, gobsmacked that he’s got another chance after staring down an early retirement, is too much to handle. I know sabermetrics reduces people to numbers and that it allows ball clubs to mercenarily manage their players but it’s still baseball and it’s still romantic. Didn’t catch before that they don’t steal bases. I like stealing but that’s me.