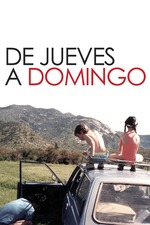 I'm extremely impressed by the grace with which the rigorous point of view* leads to plot vagaries mimicking childhood. I do wonder how my familiarity with the culture (or mostly lack thereof) plays with this effect, particularly in scenes where English is spoken. The film is anchored by 3 very impressive performances (the younger brother was more of a "cute kid," though not a cloying one,) and while it occasionally felt a bit long that's probably just because I was (am) tired.

*Not to the extent of Son of Saul, a film I was sometimes reminded of along with the first half of Kaili Blues. Perhaps there's a mutual influence I'm unaware of - Lucrecia Martel, a filmmaker with whom I feel woefully unacquainted despite having seen 3 of her 4 features, does come to mind for the less kinetic portions of this film.

Seen via Kanopy, the only legal way I'm aware of to do so. The quality left a lot to be desired but it's free - go libraries!