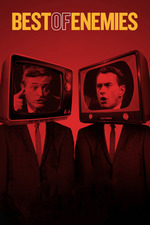 Best of Enemies captures a tumultuous age of American politics, with two charismatic personalities dueling with each other in a set of ten debates.

The two men complement each other surprisingly well, with large egos, and desires for political power. Vidal is the more outlandish of the pair, and his views skew strikingly modern.

The buildup to the infamous comment lacks some gravity, which is only provided through some reaction shots. This comes back to a lack of focus on the actual debates in the documentary. By pulling the juiciest snippets, Buckley’s brain explosion seems par for the course, rather than a simmering tension that is finally unleashed. His anger provides a great climax to this event, as does the reaction from Vidal, where he knows he has perfectly prodded the bear.

The epilogue after the debates also provides a great end to the tale. It also touches upon these public figures fear of irrelevance, but that thought is fleeting. It doesn’t over-egg the impact they may have had, even if it is stretching to link them to a legacy. However, it does help showcase what political punditry has evolved into.

|King Costanza|: A Newman cameo beat out a woman with a hairy chin immortalised in celluloid.