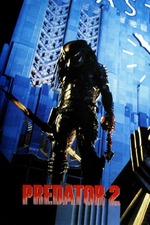 Everyone in this film is sweaty constantly. It's a ton of sweat. Like a gross amount of sweat. What I'm saying is that the real horror here is dehydration.

10 years after the events of the original Predator, the beings head to Los Angeles and take down some thugs. When a cop becomes one of the targets of the predator, lieutenant Harrigan and his associates try to track down the Predator and violence him. I like this film and have always thought it is a little underrated.

Unlike the first film, Predator 2 relies on a fun setting to push most of the drama ahead. Los Angeles in 1997 is such a shithole wasteland that a character in this film treats the discovery of an alien predator species like he just found out someone got mugged. It's fun to the see the predator in this environment because it still feels like guerilla warfare, but just in an urban setting. I wish there was a little cut from the beginning to get to predator action more quickly but this is still a fun crime story and a fun horror story.

Recommended to fans of action horror.