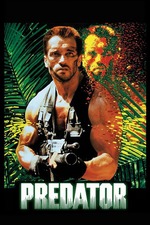 "There's something out there waiting for us, and it ain't no man" -Billy,

You'll laugh, you'll get pumped, and you'll wonder if they realized how gay some of the stuff seems.

In Predator a bunch of oily, muscly guys who love flirting with each other are on a mission to rescue people held hostage in Central America. Things are going along horribly when a FUCKING alien shows up and starts hunting them. It is an amazing film that everyone should see because other than the Terminators this is definitely Arnold's best joint. This movie is so good that snobs try to claim it's not horror, that's how good it is.

Could you imagine going into this blind, thinking you are watching a movie about a military operation and then you get an hour and twenty minutes of fighting an alien? I think what makes this such a fun movie with a fairly high letterboxd average is that it is a pretty cool action/guerilla warfare film before it becomes a badass hunted for sport flick. Predator is unapologetic about it's simplicity and it's hyper-masculinity but excels in both and gets into that sweet spot where you find yourself applauding at times and laughing while also thinking something is badass.

Predator is the height of nouveau testosterone with all its guns and sweating and shooting and yelling and biceps and mudbaths and fighting. To let you know how charismatic the actors in this movie are, two went on to be elected governor. I'm not exaggerating when I say that this film changed American Democracy. Also, Carl Weathers is in it.

Yes, I recommend but don't watch while doing other stuff otherwise you'll get lost in the first act and write some whiny review about how it is overrated and I'll have to read it.