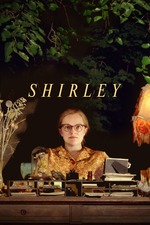 “No live organism can continue for long to exist sanely under conditions of absolute reality.” -Shirley Jackson (nif)

This movie is weird... I love weird. Shirley Jackson and her husband Stanley were manipulative assholes but they are my kind of manipulative assholes. The film is a wonderfully awkward buffet of fantastic performances and creepy occurrences that provide insight into the mind of a literary genius. It's a well-directed film with a lot to say about gender and the creative process. While Moss is queen, Odessa Young does a good job complimenting her genius and Michael Stuhlbarg gave me the heebie jeebies the whole film. It's well paced with an ending that actually froze me a little.