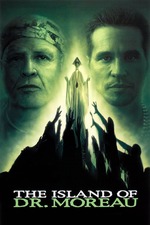 The Island of Dr. Moreau

"Again, a hyena on an island makes no sense... but then later that night I noticed my wallpaper was hyena and the hyenas were growling at me... and then I knew" - Richard "WTF" Stanley (fired director)
AND
"Please, tell them, that I am God" -Hyena,

I want one of those ice bucket hats Marlon Brando wears. That looks super convenient and I am often hot.

Pairing this movie with "Lost Soul: The Doomed Journey of Richard Stanley's 'Island of Dr. Moreau'" is a must because the story of making this film is significantly more interesting than the film itself, which is a mind-altering cringe fest with high watchability and low quality.

I like the Stan Winston makeup and visual effects. All the practical stuff is interesting and fun and HG Wells concept is strong enough that I maintained interest for the duration of the film (which I haven't watched since the theater). The real fun here is watching Marlon Brando behave like a damn lunatic, all of which is good bad movie gold. It's hard for me to disconnect the film from its crazy production story so this review is a little bit inflated.