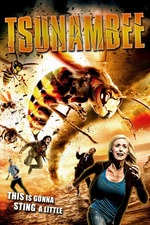 "Look I don't have all the answers, I don't know why people do what they do" - Sheriff Feargo,

Finally a film that makes you stand up and have a healthy and rational hatred of the environment.

In Tsunambee, atmospheric issues destroy LA leaving a motley crew of people that escaped and now have to evade all sorts of catastrophes, including killer fucking bees. This is a super low budget movie with horrible sound and acting and only a limited amount of fun. I watched this for the daily horror hunt because it has the same first letter as my name... now I hate my name.

Also, what is with all of the weird religious messaging and imagery? This is a pretty strange move that delves into faith in God and police violence along with giant killer bees. The producers clearly had "something" they wanted to say I'm just not sure what it is. I can't tell if this movie is trying to be funny or serious but it fails at both, and not in interesting ways.

Lots of things that come out of the blue with no set up. At one point a car people are driving in just all of a sudden almost goes off a cliff with no real explanation. One group is dressed exactly the same... I think the film is trying to imply that they are a gang but it's never made clear. It just seems like a cynical money grab more than a sincere failure and the difference between those two is important to what makes a cult film.