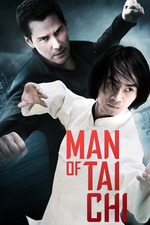 Reeves’ directorial debut seems like an odd highlight of the highs and lows of his own career. The action, especially its martial arts origin, reflects what many people have come to love of Reeves. The narrative is a little messy as it focuses more on the protagonist and his fight scenes over the police plot line that introduces us into the world of the film, but the focus is our protagonist and his conflicts (both internal and external) so it does make sense. The dialogue isn’t always perfect, especially one character who seems a little too Americanised (even though he is Chinese). Reeves himself shows off to be a capable director, both in terms of how the characters act and how they fight. He shows the utmost respect of the art of martial art, especially that of Tai Chi. Though the narrative can be predictable and is easily not anything new it doesn’t become dull.

On note of Reeves performance; it’s fun. He plays sinister really well but also pulls some hilarious faces when fighting. He is unfortunately one of the highlights of the sometimes not so great dialogue and his direction of said dialogue (but I guess if you forget about all the English in the film, the Mandarin and Cantonese aren’t that bad, at least in delivery). Visually and audibly, the film isn’t half bad either. The music is a combination of traditional Chinese and modern (almost electronic at times) music that doesn’t distract from the film at hand. The fighting sounds realistic to a not cartoony aspect which I appreciated - postmodern action sound effects if you will. There are some odd editing choices but these mostly are to do with some, at times, very interesting visuals. For example there is an elongated time lapse that is very creative and just seems to serve the purpose of showing time pass whilst also being pretty cool. Lastly, the fight scenes are competently shot with only one of two bad shots or setups that luckily aren’t too distracting (except the flashing light sequence which can get annoying when the subjects aren’t silhouetted).

Overall the film is fun, action heavy and character driven. Definitely one to check out.