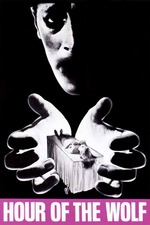 A typical Bergman film, with the horror element people hype this one up for tacked on at the end.

After seeing 8 movies from Director Ingmar Bergman, I feel like I pretty much know what to expect from his films, and Hour of the Wolf was the first one I felt underwhelmed by. The film stars Max von Sydow and Liv Ullmann and is a real slow burn about an insomniac painter who begins losing his grip on sanity, as a result of frightening visions he is experiencing.

- Expect plenty of close-up long shots of people's faces. While I really enjoyed that aspect of 'Persona', I did not find myself being nearly as intrigued by it with these characters or story

- At first, it was challenging to understand what was going on at times throughout. But with looking back through it I picked up on how some of the visions are shown as a result of his wife reading about them in his journal, like the encounter with his ex-lover

- They get invited to a dinner party with a strange bunch of characters, and watch one of them put on a production of Mozart's 'The Magic Flute', which Bergman later adapted into a film

- One of the best visual moments is when a shot of Ullmann fades to a wide shot of the couple's silhouettes walking home, with the sun setting over the water behind them

- One of the strangest scenes is apparently a confession he makes, where it flashes to von Sydow's character becoming irritated by a young boy that bites him while he is fishing. So after a brief struggle he kills him with a rock, and pushes the boy's body into the water. I thought it was odd how overblown the lighting in the scene was, and while watching it I got the impression that it may have been suggesting that he had a fear of becoming a father

- It then appears like he shoots his pregnant wife to death, but that just ends up being a fake-out

- In the last 20 minutes, the painter returns to the house from the dinner party, and this is when the anticipation for some great horror elements finally get paid off. One of the guys walks up a wall and stands on the ceiling, an old woman peels her face-off, and finally the painter examines the body of his ex-lover as the rest of the creepy people watch him and she suddenly springs to life

- Then the painter's wife sees him in the woods as he is overcome by the creepy people and vanishes. The film then closes with her facing the camera and recounting her feelings about what happened to her husband

There were plenty of great Bergman moments here, but I think the slow pacing early on kept me from ever feeling invested in what the film had to offer. So by the time things did get better toward the end, it just felt like it was too little too late at that point.

With adjusted expectations, I may get more caught up in Hour of the Wolf on a rewatch. I can see how it was a groundbreaking psychological horror film in its day, but the genre has come a long way IMO, and I prefer the more modern scarier films over this classic example.