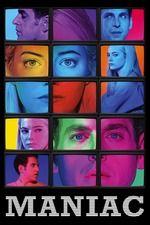 I can actually hear Princess Carolyn in the new season of BoJack Horseman, speaking inside my mind
as I watch Maniac,

It's confusing, which means the show is daring and smart.

Maniac is a new miniseries from Netflix that stars Emma Stone, Jonah Hill, Justin Theroux, Sonoya Mizuno, Sally Field and Gabriel Byrne, and also the actor who played the idiot in Game Night - I forgot his name (it's Billy Magnussen). It's focused on two strangers who signed up on a pharmaceutical trial for money, and that trial goes to shit. It's probably my second-most anticipated Netflix series that I can't wait to watch; I mean, look at that trailer, man. It looks like a fun, imaginative acid trip with an emotional core, so I've watched it from start to finish, and I'm here to tell you, it does have what I describe, but I didn't expect this series to be uninteresting and dull.

I wanna start out the positives: the first three episodes are very promising. The grand world-building is visually presented with some occasional mix of expository dialogue. The acting is great, especially from Emma Stone, who is the standout. I thought Jonah Hill is miscast; he's pretty boring to watch at times. Though there are a few moments where Hill's character is given different material, I feel like the writers or the actor could've made something different than seeing him grumble or act somber for 90% of the time. The production design is absolutely fantastic; the show has this visual grandeur that constantly changes from retro-80's theme to a fantasy world where elves and magic exist, and they're all so refreshing and eye-pleasing to see, mainly because of the great mix of Cary Fukanaga's (unsurprisingly) fantastic direction, Darren Lew's stellar cinematography and impressive CGI.

So what went wrong?

Well you know for a show that's supposed to mindfuck you with its changing realities and weird concepts, I just found a lot of these moments very uninteresting to watch. There's a show titled The Leftovers, where a lot of its episodes are basically absurd shit that if handled poorly, would be a laughing stock, and it is a laughing stock, but it's more than just one. Like for example, there's a masterful episode where a preacher gets into a private boat filled with members of a lion sex cult who have an orgy throughout the whole ride, and he encounters a man who claims himself to be God amidst all the chaos; in that episode, the preacher is always in a situation of conflict, combining absurdist comedy and somber character study that you don't feel bored at all, but you feel a massive wave of emotions washing over you: it can be pure joy or solemn melancholy or just a fantastic mix of both. As for Maniac, it's less than an exploration of its characters and their traumas and experiences, and more of a Legion-esque type of stylish tonal confusion. And because of that, it's just a very unrewarding viewing experience.

I thought none of the characters are worth rooting for, or feel connected with them, except for Emma Stone, who has a dramatic subplot involving her sister. I think that one was done well; it added the needed dramatic layer, but other than that, nothing really mattered to me. Jonah Hill's conflict with his family and his condition is introduced and explored in the most boring way possible: the alternate reality featuring his family is such a chore.

Overall, Maniac is very disappointing. It's listed as a dark comedy, but despite a very few chuckles (from the ridiculousness of some scenes), I didn't really find most of it hilarious. I wanna see it as some smart, hard sci-fi show with very complex themes, and it does have something to say about trauma and mental illness, but it never completely fleshes them out and I've seen better explorations in other TV shows. It constantly shifts tone and genre that it just feels like it doesn't know what kind of show it wants and I just didn't care any of its so-called "imaginations" during the trials. But it's still a very well-made, great-looking show with a decent cast, so I guess it's not for me?