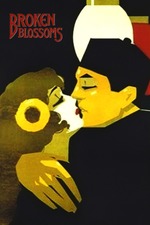 D.W. Griffith must have felt pretty terrible about the reaction to The Birth of a Nation as several years later and even after the epic apology that was Intolerance, he seems just as determined to turn the tide against any lingering sourness in regard to his reputation.

Broken Blossoms dispenses with the grandiosity of his prior work in favour of an intimate, considerably shorter story with fewer characters, plot-lines and spectacles, with a much greater focus as a result. Based on Thomas Burke's short story "The Chink and the Child", the film is very much of its time and should therefore be viewed that way, its very obvious faults are glaringly exposed after a century of societal change but if you can accept its archaic methods there is a wonderful film here with a heartfelt and affecting message.

Lilian Gish is something else here, her performance hysterically theatrical but it conveys so much youthful innocence, misery and fear without the aid dialogue or intertitles. The famous closet scene, which seemingly inspired Stanley Kubrick when making The Shining is eerily disturbing, Gish really pushes the boat out in an exclamation of sheer terror. Films from this era were compelled to paint in broad strokes, foregoing fine detail for over-exaggerated simplicity, something that is evident in the portrayals of the characters by the cast–Gish nothing but a sweet and virtuous girl, her father nothing but an evil brute who despises everyone and has to constantly use aggressive body language to affirm this.

This simplification is far from realistic but it has a poetic integrity. The story is rooted in Victorian era values of religious morality and burgeoning tolerance; Griffith truly captured something beautiful here and his treatment of the Chinese protagonist is surprisingly sensitive. The editing is quite masterful, Griffith cross-cuts and utilises closeups to show the power of his performers reactions with such ease and understanding of what we now know as modern techniques, but were then just primitive concepts.

Billy Bitzer's cinematography is evocative and atmospheric, using a Hollywood set to authentically recreate the foggy grime of London's Limehouse district, it adds expressive, mystical quality to the central romance. It truly is a deeply depressing film with relentless cruelty and injustice on display, not to mention championing interracial relationships decades before Sidney Poitier came for dinner. It must have made quite an impact on cinema-goers of the time and remains an illustrious piece of early cinema.