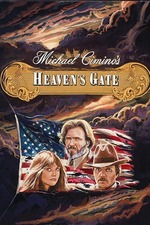 After being fascinated by this film's reputation and polarising opinion for a long time I've finally seen it in its entirety, fully restored in a director approved edition. Etched in cinema history as the film that simultaneously bankrupted an entire studio, effectively killed the western genre for a decade and perhaps most profoundly of all, ended the auteurist freedom that directors had enjoyed throughout much of the seventies; its importance cannot be overstated.

Heaven’s Gate stands as one of the greatest ego trips ever put onto celluloid, an example of unchecked hubris not seen since the likes of D. W. Griffith in making Intolerance and it seems only fitting that United Artists, the studio that he co-founded was the very same one that almost collapsed because of it. Contemporary reviews were eviscerating, admonishing Michael Cimino's production, calling it one of the worst films ever made and a total failure, but recently its merits have began to be recognised, even getting a Criterion Collection release and I have to say, as frustrating and flawed as it is there is a staggering work of art in there amongst the bloat. What was once misinterpreted as self-indulgence can now be viewed as quiet self-reflection that explores and deconstructs western mythologies with great care and unspoken insight.

To call it slowly paced would be putting it mildly, the first two hours feel like an endless series of establishing shots and saying that nothing of any consequence happens in this time isn't an exaggeration. Cimino goes about world building but doesn't stop to consider anything else, he falls in love with the immersion, the sets, the landscapes and the film itself to the point where nothing except absolute perfection is good enough and I can't help but to admire his ambition. Like Robert Altman's McCabe & Mrs. Miller and Henry Fonda's The Hired before it, this isn't about gunslingers but about the real, hardworking people who endured the harsh way of life on the frontier. Its themes of prejudice towards the lower class, corruption and anti-migration is astutely prescient of Trump's America.

This is without a doubt one of the most visually staggering westerns ever made, Vilmos Zsigmond's cinematography captures the Montanian (though it is set in Wyoming) landscapes that look like they were taken straight from an art gallery, the use of light and shadow is rendered so poetically it almost comes across as surreal. The sheer detail and majesty of Cimino's vision really does transport you to this time and place like few other works in the genre are able to do, the lengthy scope, lack of urgency in its storytelling and attention to detail predating HBO's Deadwood by a quarter of a century.

There's no doubt this is a demanding and draining watch but I certainly got something from it, even if it was diluted by the extreme overreaching of its despotic director. There are flashes of Visconti's The Leopard in the presentation but it never quite reaches the same emotional climax, all the build up doesn't seem warranted considering the story unfolds almost entirely over the course of a few weeks, I feel like if more time had been given to both the prologue an the epilogue it would have made the progression of time all the more powerful.

It may be a failure but what a magnificent failure it is.