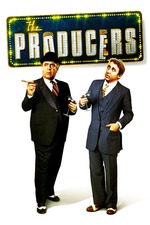 The film is about a producer who convinces an accountant to help him with a scam that involves over-financing a sure fire flop of a play called Springtime for Hitler.

The Producers may not be one of Brooks’s best, but it has plenty of charm and a very funny script. Unfortunately, the film has a very predictable plot and doesn’t boast a strong ending. Still, the film is very enjoyable for its runtime. Mostel and Wilder have incredible charisma together, and they make Brooks’s script come alive with their back and forth banter.