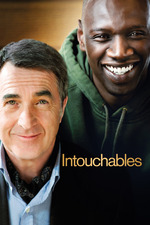 Okay so let’s address the elephant in the room, the stereotyping and racial tropes presented in this film are not it.

It’s a glaring indication of the view of race amongst the wealthy white French. An uncouth, lazy black immigrant man who only wants to live off benefit? What racist ass handbook did this come from?! (Google the Sambo if you don’t know already). I think what makes it particularly more egregious is the fact that the storyline is based off of the real life friendship between a French man and his Algerian caretaker. The person this movie is based around is not even black, so they choose to inject these harmful ideologies into the film.

Now that we covered that, I have to say that the chemistry between the Driss & Philippe was palpable. They played off each other so well comedically and their acting felt so authentic and genuine (yes, I did cry at the end, oops sorry). They really carried this film and made it more tolerable despite it’s more unsavory content.